Surely you've heard dozens of ideas & theories of what this star could have been.  In researching this for over 50 years my eyes have seen hundreds.  However, if we apply several verses of Chapter 2 from the Gospel of Matthew, we have a criteria from Scripture of what look for:Jesus was born in Bethlehem, during the reign of King HerodThis is important to fix a time. Some say Herod died in 4 BC, so consider 5 BC or 6 BC as possible years of our Savior's birth, the other school of thought indicates 1 BC, which then has 2 BC or 3 BC as possible birth years. We'll see why I'm guessing 3 BC...The Magi from the east came to JerusalemSomehow these gentlemen's roles were altered to Kings or even something to do with magic.  The Magi in Babylonian text were referred to as an ancient tribe of learned men consulting rulers in what is now Iran & Iraq. The earliest mention of the Magi in this role was a court astronomer who warned King Sargon of Akkad (Sargon the Great) of an impending invasion in 2261 BC - which did occur.... 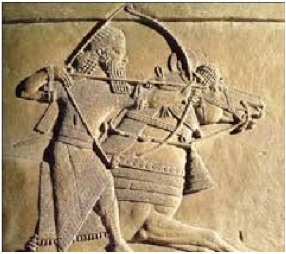 So well known for their wisdom, no member of the Median royal family could become king until he mastered the scientific & religious knowledge of the Magi, known as the Law of the Medes. King Nebuchadnezar had a court full of Magi, and besides making Daniel Prime Minister, also made him Chief Magus (chief of all his wisemen) when Daniel was able to retell & interpret the king's dream when his other wisemen couldn't.  (More on Daniel & the Magi later).Keep in mind these Magi came from an area that was the arch-rival of the Roman Empire in the east.  For these men to even enter a territory occupied by Rome was like a busload of German philosophers taking a trip around Verdun, France in 1916.

Matthew 2:2 (and the Magi asked) "Where is the one who has been born king of the Jews?"This question tells us three elements they were able to ascertain by the star: An important BIRTH, an important KINGSHIP, and an important factor concerning the JEWS. Now, this question by the Magi raises another question. Why would wise men from Elam, the Median or Babylonian Empires be interested in the birth of a Jewish king?  (This again may have something to do with Daniel, as we know he kept the faith which naturally spread to others in these areas.)

The fact the Magi came to worship the newborn king tells us their motive: To worship the Jewish King who is the Messiah. The Jewish philosopher (20 BC? -  40 AD) who blended Scripture with Greek philosophy suggested these Magi traveling to Jerusalem were most likely descendants of those Jews who remained in Babylon from the time of Daniel - and kept the search for the Birth of Christ going in its purest form and mentioned these verses in Psalms: 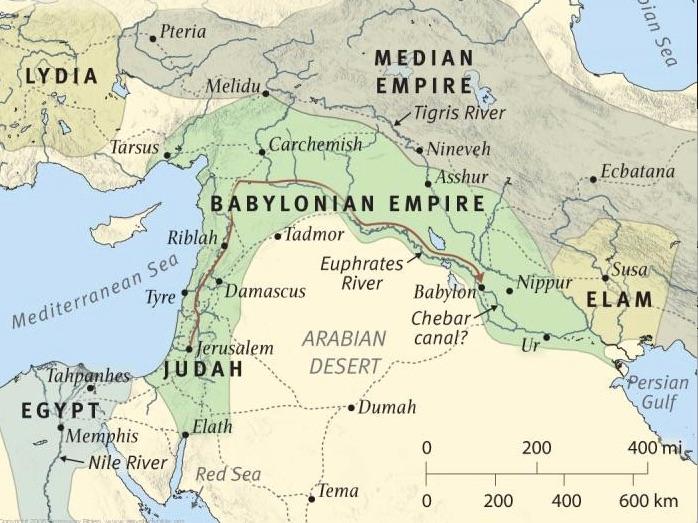 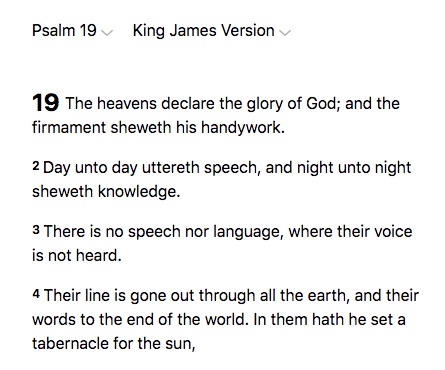 Declare, Speech, Language, Voice, Words - notice David chose verb after verb to point out COMMUNICATION with the heavens?  So please forgive me if my (heaven bound) parents named me David and I ended up doing the same...
When King Herod heard this he was disturbed, and all of Jerusalem with him.Of course he was disturbed...he was terrified.  At this time all the Roman troops Emperor Augustus had in Judea were off somewhere, and here comes an entourage of Magi from the east with metaphysical signs & scripture (confirmed by Daniel) wondering where the new King of the Jews was....this was a military, political, religious, & supernatural problem dumped on his doorstep without warning. (Except as we know there was a prophecy in his library - were the Pharisees in Jerusalem just too satisfied with themselves to take note of it?)
King Herod was not Jewish but an Edomite, and was made king by the Romans since he excelled as governor in the two qualities the Romans valued most in their puppet state rulers: collecting taxes & keeping the peace. When King Herod is disturbed, all of Jerusalem would be too, for they all knew, when King Herod panics, lots of people end up dead.

Then Herod called the Magi secretly and found out from them the exact time the star had appeared.

This tells us two things, the star appeared at an exact time, and Herod didn't know when it appeared or knew of it....

He had to ask.

This would indicate that whatever was in the sky was a natural phenomena - that is, it was not a comet, supernova, alien spacecraft of anything out of what was already known to be in the sky - otherwise (believe me) these things would have been not only the talk of the town, but written down.

After they had heard the king, they went on their way, and the star they had seen in the east went ahead of them until it stopped over the place where the child was.

From this we can also conclude:

1.) The start endured over a period of time (seen in the east & when they arrived in Jerusalem)

2.) It moved as they left Jerusalem.

3.) The star stopped over Bethlehem.

Based on all the verses of Scripture above, here is deduction of what the Star of Bethlehem may be - if it was indeed a known celestial occurrence (that is, not aliens, magic, etc.)

First, let's take away any "magic" narratives often associated with this story. Cam a star - or in this case, a planet - stop?

Planets can, and actually the word planets  come from the Ancient Greeks calling them πλάνητες ἀστέρες
or "wandering stars". 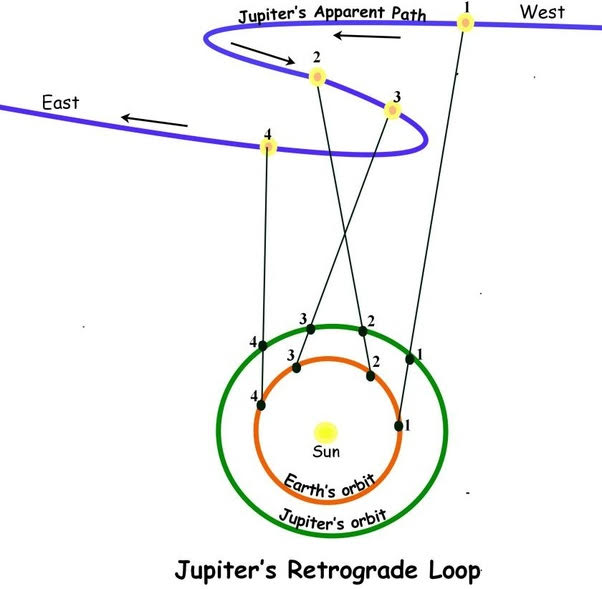 In the same way you pass a car on the highway and it appears to stop or even be moving backwards due to what is called apparent motion. The other car is not moving backwards of course, it is only moving slower.  The same with planets. When the earth passes Jupiter (as seen above) for a while it appears from our perspective to stop, and even move backwards as we zip past it in our own orbit.Jupiter was used in the above example for a reason. In September, 3 BC the view of the night sky in Babylon, Jupiter (the largest planet) was next to Regulus. Regulus was called Sharu in ancient Babylonian times, meaning "king", the Romans called it Rex, which means "king", and is the king star in many other cultures.  So Jupiter (the king planet) comes very close to Regulus (the king star). So what? Jupiter passes through the sign of Leo (where Regulus is located) approximately every 12 years.However, due to declination & a host of other variables (planets do not orbit on the exact same plane with each orbit) this is one rare time in human history that it came very, very, close.  Plus something else unique occurred, it retrograded (appeared to move backwards) three times around the King Star:

OK, so if you were a Magi, and you saw this, you definitely have some indication that KING is in play here.  However, where do we get King of the Jews? Of the twelve Jewish tribes, which one does the Messiah come from?

And what is the animal symbol for the tribe of Judah? 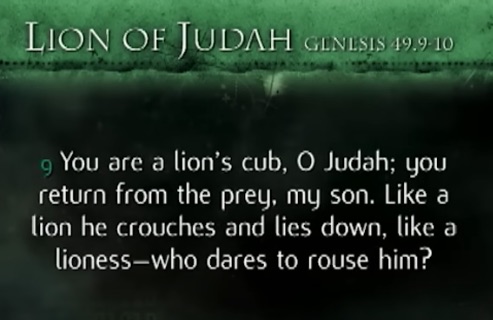 Remember the sceptre, it comes up later in Revelation if "a rod of iron" can be considered a sceptre: 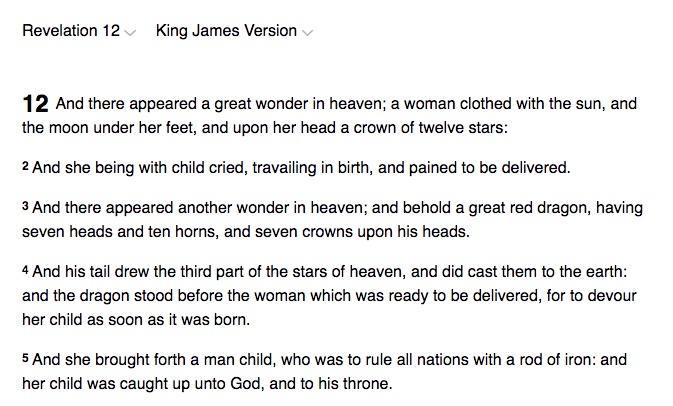 Revelation 12.1 has always been fascinating as one who stargazes.  Earlier we covered how this constellation configuration occurred in September 2017.  Could this also describe the birth of Christ or the birth of Israel as a nation? As we used to say in Bible Study at Shady Grove Baptist Church - yes, and yes.  In September 3 BC we do have a woman, Virgo (the Virgin) clothed with the Sun and the Moon at her feet: 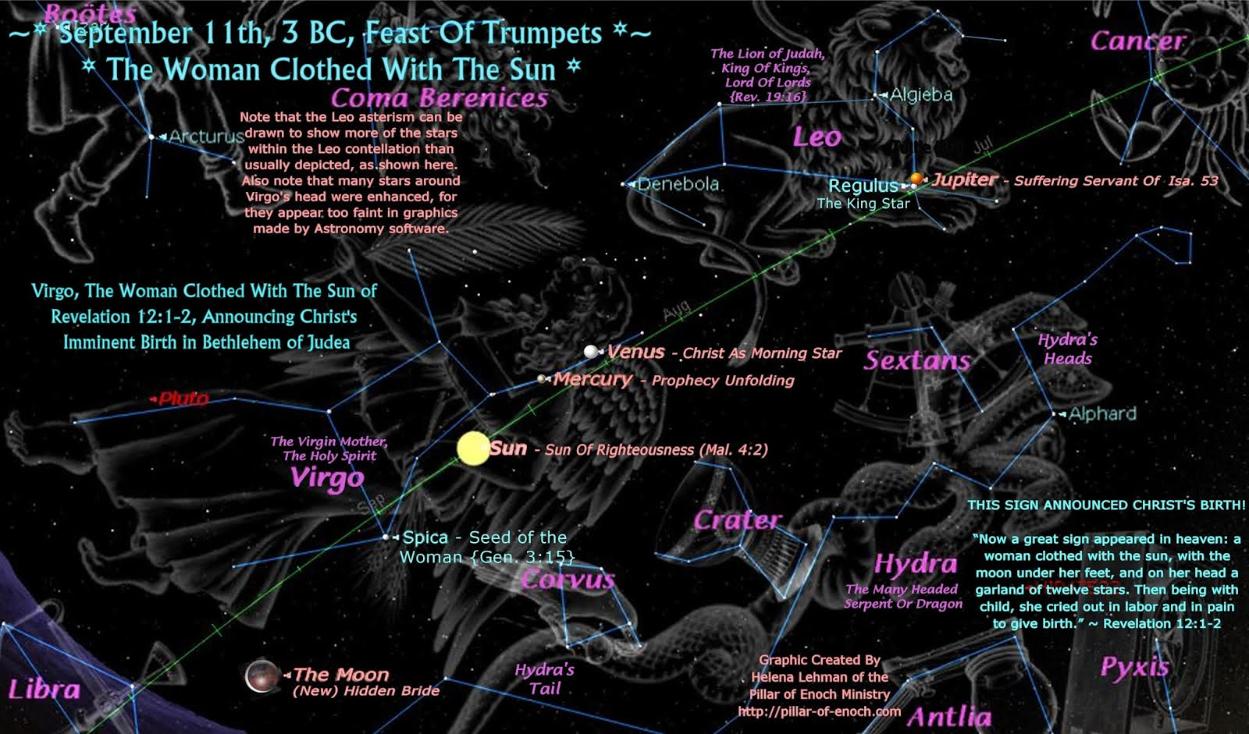 If the Red Dragon is Satan, working through King Herod to devour the child, this would also be consideration for this being another circumstance of what is in the sky happening on earth at the time of Christ's birth.So what's with December 25th...?  One of the earliest mentions was from Sextus Julius Africanus (180 - 250 AD) who dated Christ's conception on March 25th (the day he held that the world was created as well), so nine months after that would be a December 25th birth.  In 336 AD Emperor Constntine began formally celebrating Christmas on December 25th in what some felt was more of a political move, attempting to Christianize the most popular of ancient Roman festivals: Saturnalia (think Mardi Gras times 100 in madness & debauchery).However, if we consider the movement of Jupiter in 3 BC, 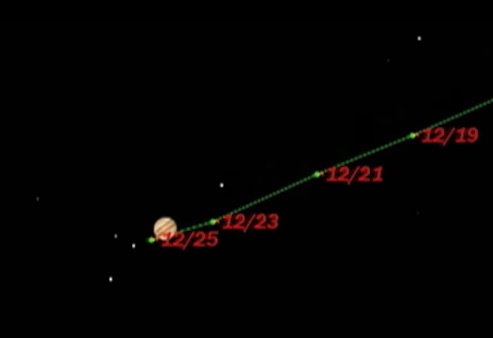 on December 25th is when it stopped in the sky  (it was just about to start moving backwards again).  Was this the time it stopped for the Magi while approaching Bethlehem?  True, Herod told them to try Bethlehem after finally finding an old prophecy, but remember, they still followed the star, until it stopped:

If Jupiter is the "star" they were indeed following, then December 25th could indeed be the first celebration of Christ's birth, for that's when the Magi presented Jesus with Gold, Frankincense, & Myrrh (and it wasn't in a manger like we so often see), for as described by the Greek text, Jesus was aπαιδίον (paidion/toddler) by then living in a house.

One more note about King Herod, it was not a totally original order to order the death of all baby boys in a certain candidate range.  In 63 BC another sect of Magi (yes, there were good ones & bad ones like with everything else) made a presentation to the Roman Senate that a new ruler was being born who would cause great difficulty in one of their vassal states. So besides being a Roman precedent for this sort of thing, this would be another reason all of Jerusalem was disturbed as well....the news the Magi bought from the east was a foreshadowing of massive bloodshed of the innocent. 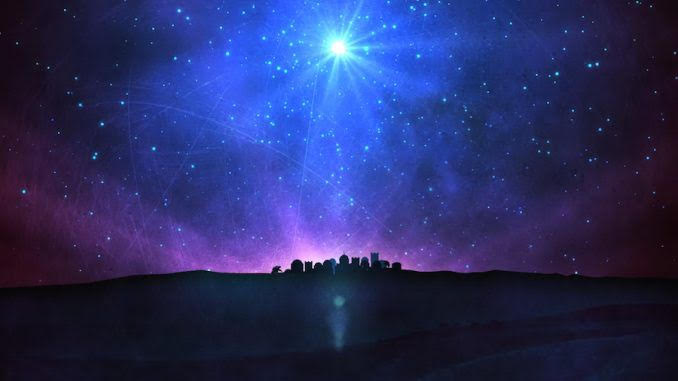 Finally, if you were a star gazer in ancient Babylon nine months before all this activity, there was something in the sky that might have attracted your attention - the brightest star ever seen before in human history - except it wasn't a star - but Venus & Jupiter coming together so close together (sound familiar?) that they did not overlap or cancel each other out, but appeared as one giant star.  Was this the conception?Whatever the Star of Bethlehem was, in my opinion, if it was indeed a combination of natural occurrences in the great celestial timepiece in the sky, then this is just as much of a miracle as if it was something metaphysical or some unusual phenomena.  For it reveals that all of this was part of God's plan from the very beginning....Merry Christmas....!